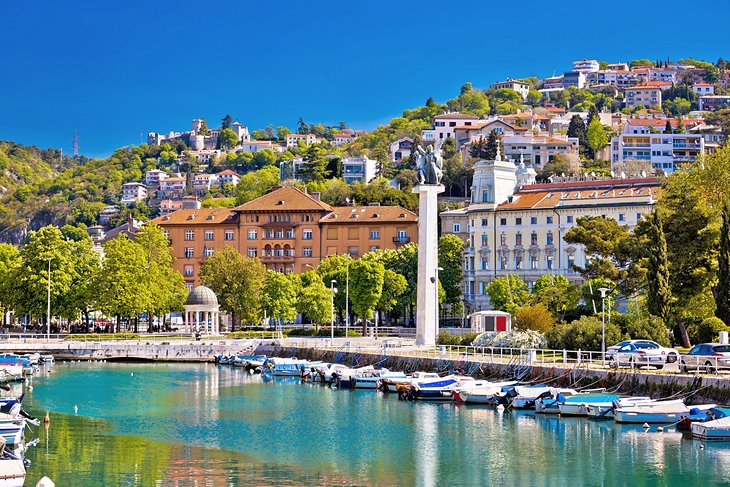 Croatia attractions and luxury adventure tours? Encompassing 142 square km along the Krka River, the Krka National Park is best known for being home to a number of stunning waterfalls. The most popular of these are the Skradinski Buk falls, which are one of the most famous sights in the entire country. However, the park is home to plenty of other worthwhile sights as well, including secluded monasteries, diverse wildlife, and the 200-meter-deep karstic canyon through which the river runs. The park can be accessed by car through any of the five main entrances, which are found at Skradin, Lozovac, Roški Slap, the Krka Monastery, and Burnum.

If there is a place where party goers, nature lovers, and adrenaline addicts coexist in Croatia, then it is none other than Makarska. Nestled right between Biokovo mountain range and Makarska Riviera, this is a place of everything rocking and everything tranquil. For beach bums, this is a top tourist attraction in Croatia because of the stunning pebbly beaches. For adrenaline addicts, there’s paragliding, rock climbing, mountain biking, hiking, windsurfing, and more. For party-goers, some exquisite restaurants and bars do the magic, while for the individual types, the nature lovers, a relaxing stroll along the waterfront spells all the magic. Those who drop in during the seasons, a vibrant nightlife becomes the reason to die for.

The 10th Omis Guitar Fest will take place 17th to 22nd June 2020, with both guitar professionals from the local region and abroad taking part. The festival features masterclasses, workshops and concerts, and there is also a competition with various categories. Makarska kicks into life from June until September. Occurring almost (but not strictly) every week in July and August, Makarska’s Fishermen’s night sees a sprightly folk festival animate the waterfront. A celebration of local culture specifically for visitors, it’s a great opportunity to snag some fresh fish and seafood, washed down with local Croatian wine. The festival sees people milling about in traditional costume and attendees participating in fun, simple games like balancing on a beam to the soundtrack of Dalmatian music.

Gornji Grad is the medieval core of Zagreb and translates as Upper Town. It developed as two separate towns, Kaptol, the seat of the Bishop, and Gradec, the free town where tradesmen and artisans lived. The towns merged in the 1770s to form the northern section of historic Zagreb. The focal point of Gornji Grad is the square around St. Mark’s Church, the parish church of Old Zagreb. Discover even more info on https://adventurescroatia.com/.

Croatia’s most visited inland attraction, Plitvice Lakes National Park (Nacionalni park Plitvicka jezera) encompasses steep forested hillsides surrounding 16 emerald-blue lakes connected by a succession of thundering waterfalls. A network of footpaths and wooden bridges crisscrosses the park (the country’s first national park), and the entrance ticket includes boat rides across the lakes. Thanks to the lush pristine nature, the park is a haven for wild animals, including wolves and bears (though they are timid, so you are unlikely to see them) as well as owls, eagles, and falcons. There are several hotels on the edge of the park should you wish to stay the night. You can visit Plitvice on organized sightseeing tours by bus from Zagreb and Zadar.