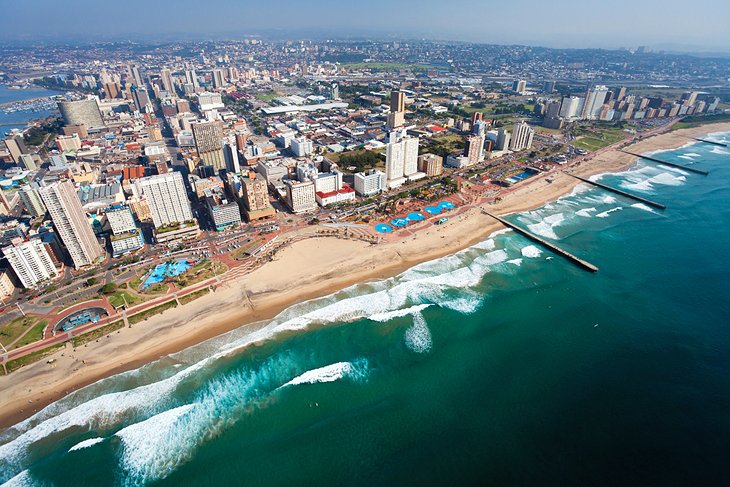 South Africa attractions: The Drakensberg is the highest mountain range in Southern Africa, rising to 3,482 meters (11,420 ft) in height. The name is derived from the dutch and means “dragons mountain”. The Amphitheatre is one of the geographical features of the Northern Drakensberg, and is widely regarded as one of the most impressive cliff faces on earth.

Bloukrans Bridge is an arched road bridge and the highest in the African continent. Standing 708 feet above the floor of the gorge, it is part of one of only three highways in the world to have a bridge exceeding 500 feet. Take a bungee jump or enjoy a Bridge Walk across the gorge with the adventure sports centre, Face Adrenalin. For those who prefer keeping their feet on the ground, a gentle walk along the catwalk to the top of the arch is probably a better option.

A merger of South Africa’s Kalahari Gemsbok National Park and Botswana’s Gemsbok National Park, the Kgalagadi Transfrontier Park is one of the largest wilderness areas in the world. Established in 2000, it is Africa’s first officially declared transfrontier park and lies in a remote region of South Africa’s Northern Cape. Gnarled camel thorn trees, red sands, golden grasslands, and deep blue skies provide a bold backdrop for photographs and game viewing. Among the huge diversity of wildlife, this vast conservation area is home to the famous black-maned Kalahari lion, stately gemsbok with their V-shaped horns, the sprawling nests of sociable weavers, meerkats, and many birds of prey. Other predators such as leopard, cheetah, and hyenas are also found here. Four-wheel drive vehicles are recommended for some of the minor rugged roads or for those venturing into Botswana. Read extra info at South Africa travel.

Located in the heart of the Newtown Cultural Precinct, World of Beer is a great place to learn all about the ‘golden nectar’ from its early Mesopotamian days to Europe and Africa. Breweries were established down here as early as 1658. To learn more about the process, take a tour and watch floating holograms, 3D movies and a 12m-high screen to see how it all happens. After this thirst inducing 90-minute tour, enjoy two beers of your choice on the house, in the centre’s Tap Room!